Two prominent colors are represented on the album artwork and in its title; black and blue. They represent the Stones’ love of Black music (R&B, Soul, Reggae and Funk) and also for the Blues, all genres which are featured on all of the album’s tracks. 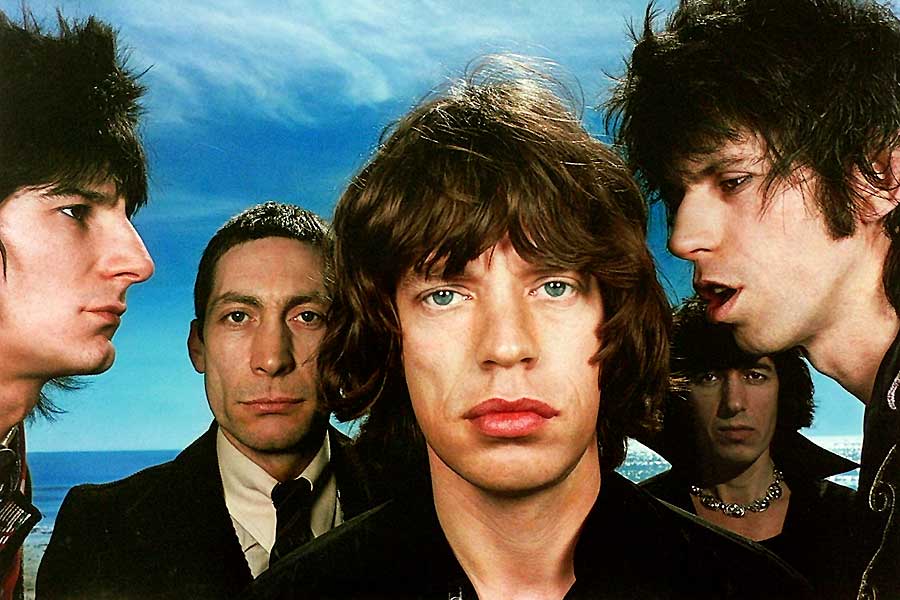 For the ad campaign, Jagger and Richards had a double entendre in mind…

The advertisement for the album appeared in Rolling Stone magazine on July 1, 1976  – just in time for America’s bicentennial. Instead of adding some red and white to mark the occasion – they thought a battered and bruised woman would do the trick. The ad was photographed by Japanese-American surrealist fashion photographer Hiro (Yasuhiro Wakabayashi) who was mentored by Richard Avedon.

Mick and Keith were at the photo shoot, directing model Anita Russell who was tied and suspended by a rope. Anita wears face and body make-up to appear as though he had been beaten and bruised. Allegedly, Jagger artfully painted the “bruises” on Russell’s body. She sits atop the Stones album cover with her legs spread apart. This image was also featured on a gigantic billboard on Sunset Boulevard with the tag line, ‘I’m Black and Blue’ from the Rolling Stones – and I love it!” Perhaps they thought it was OK because she had a powerful ferocious look on her face, indicating that maybe she needed to be restrained. It’s only rock ‘n’ roll, right?

Feminist groups responded with fury, spraying the billboard with graffiti and prompting Atlantic Records to withdraw the billboard and the ads with apologies. Anita later posed for a National Lampoon mock-up photo of Jagger tied up, as she watches in amusement. (See below). 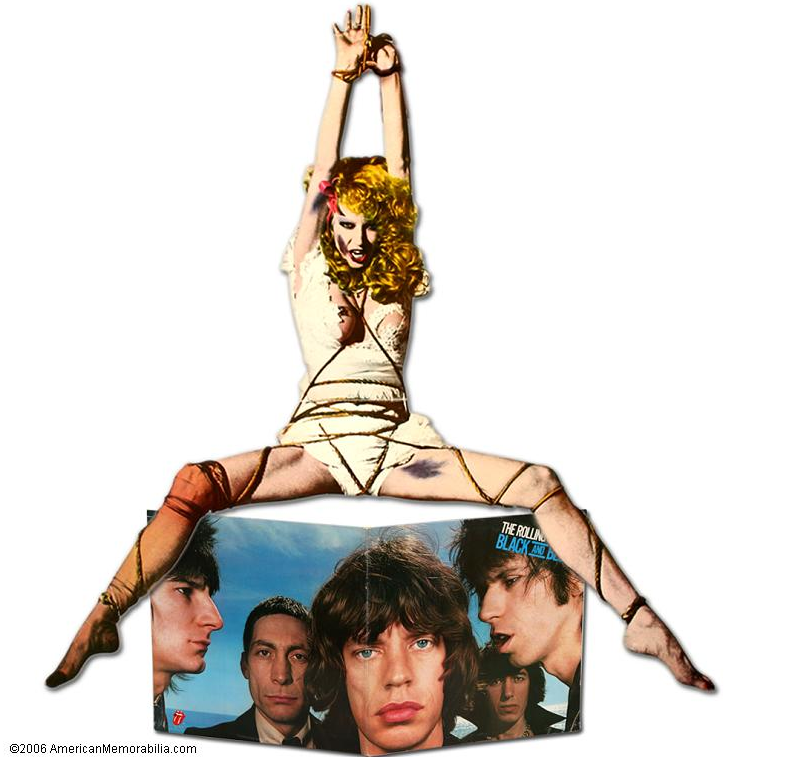 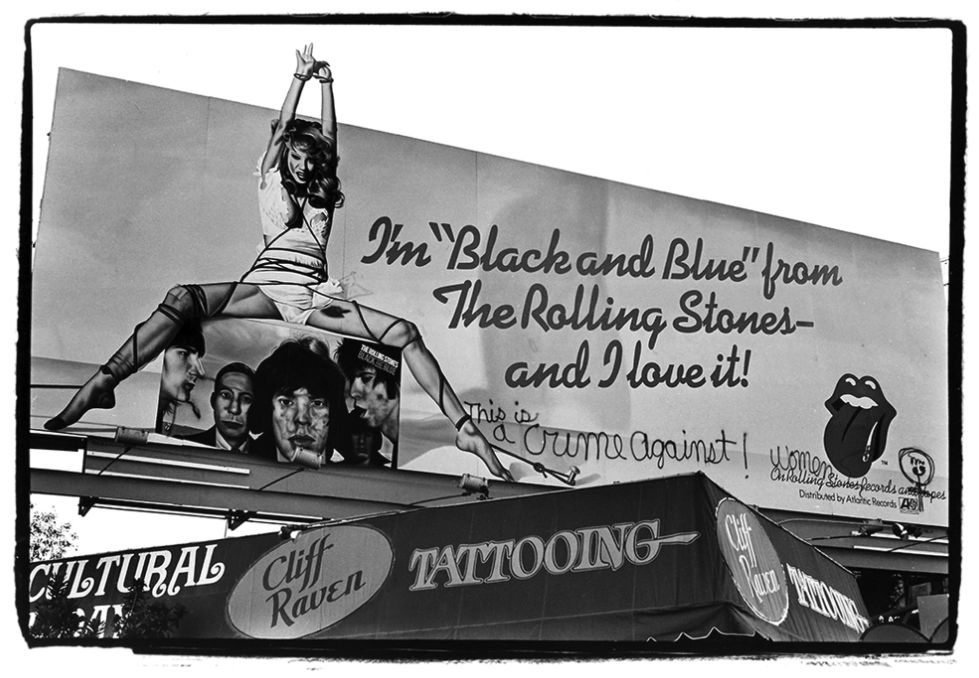 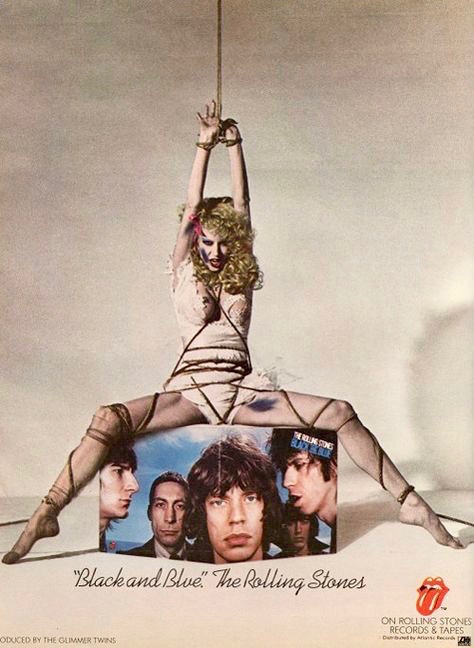 The album followed It’s Only Rock ‘N’ Roll –two years after guitarist Mick Taylor had quit the band. (Ron Wood became a member of the Stones in 1976). Keith played most of the guitar parts on the album.

The music is what Black and Blue is all about! 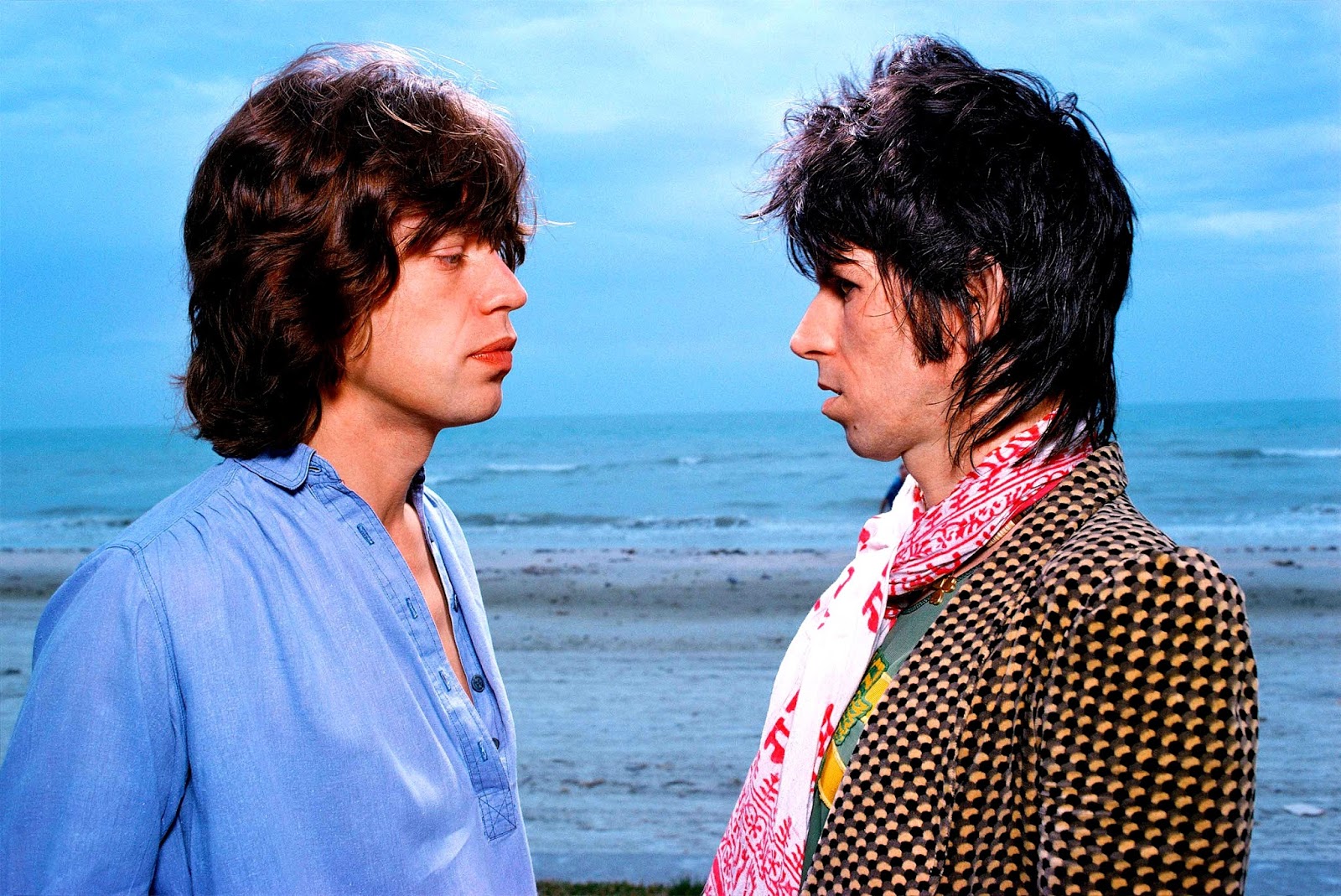 It is interesting that David Bowie – who was running on a strange parallel with the Stones – was also on an R&B trajectory at this time. It began on his Diamond Dogs album (1974) with the strange funk of the song ‘1984’ and its Barry White influence with (Isaac Hayes) ‘Shaft’-styled strings. Bowie then had a hit single with ‘Fame’ (co-written by John Lennon) in 1975 on  his album Young Americans. His soul theme carried over on Station to Station with ‘Golden Years’, but it petered out when he got heavily into Krautrock.

My story all about Bowie’s song ‘Fame’ 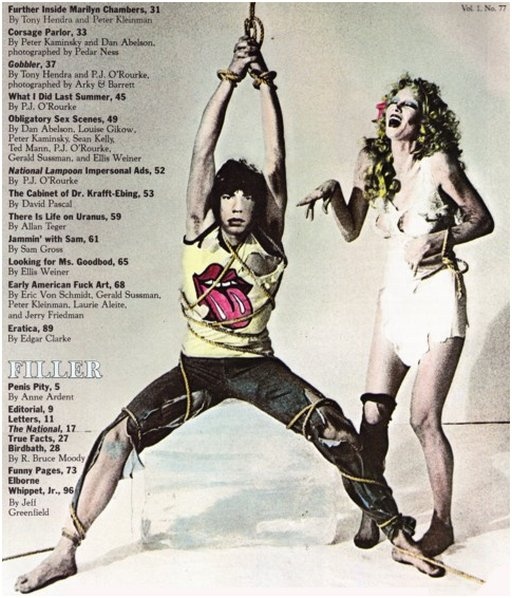 © Madeline Bocaro 2020. No part of this text ma may be copied, photocopied, reproduced, translated or reduced to any electronic medium or machine-readable form, in whole or in part, without the  prior written consent of Madeline Bocaro. Any other reproduction in any form without permission is prohibited. All materials contained on this site are protected by United States copyright law and may not be reproduced, distributed, transmitted, displayed, published or broadcast without prior written permission.