HERE ARE SOME PRETTIES (AND UGLIES) FOR YOU! 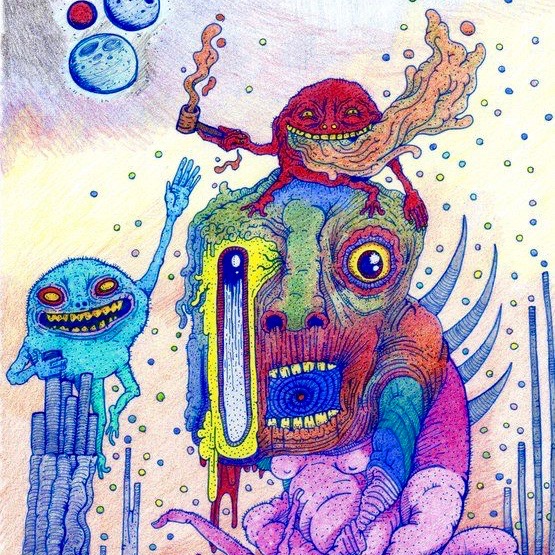 ‘Beauty and the Beast’ appears on Bowie’s 1977 album “Heroes”. Bowie was in the midst of his Berlin phase.  The Jungian lyrics to this song about the positive / negative duality of human nature is in the cut-up style of Bryon Gysin/William Burroughs.

Here is my story all about Bowie’s song “Heroes”

The Rolling Stones released ‘Beast of Burden’ on their album Some Girls in the summer of 1978, and soon after as a single. The cover art was by Peter Corriston, who also designed Led Zeppelin’s Physical Graffiti cover. It was modeled on vintage ads for wigs. The die-cut cardboard featured members of the Stones in drag beside female icons – all with Warholized red painted lips. The divas contested the use of their images. This resulted in a court case; The Stones vs. Bridget Bardot, Doris Day, Farrah Fawcett, Lucille Ball, Raquel Welch, and the estate of Marilyn Monroe! Alterations were made with the statement, ‘Pardon our appearance – cover under reconstruction’. The cut-out designed was revived on the CD version using the Stones’ heads instead of the female legends. 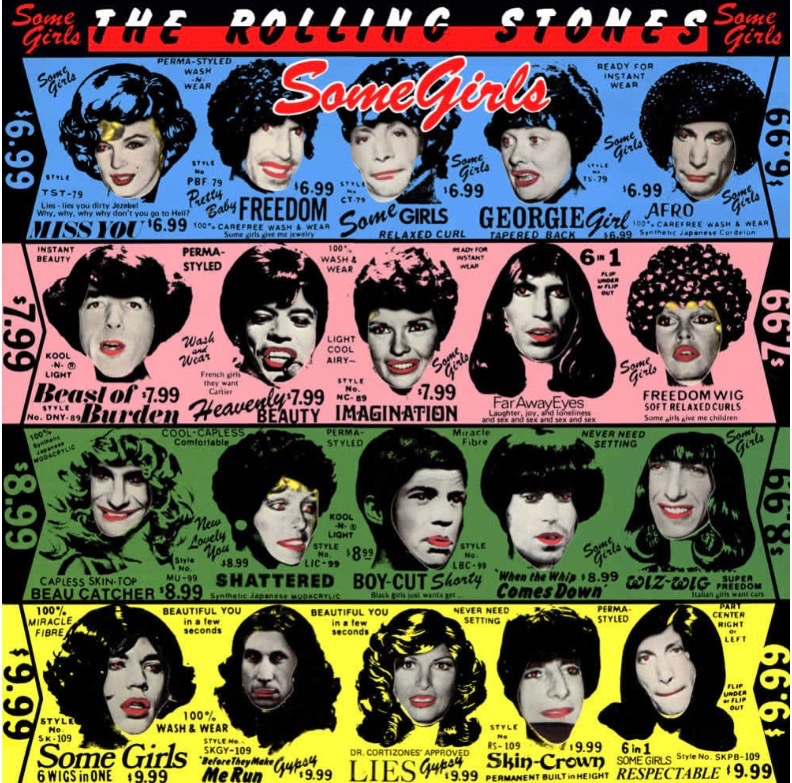 ‘(Oh No!) Not the Beast Day’ is by the wonderful Marsha Hunt, mother of Mick Jagger’s first child Karis. This is a cool and funky song, but I can’t find her incredible live performance anywhere on YouTube anymore, so I’ll just include the audio.

And here is Marsha’s cool version of ‘Desdemona’ by John’s Children – the band which featured Marc Bolan before he formed T. Rex. 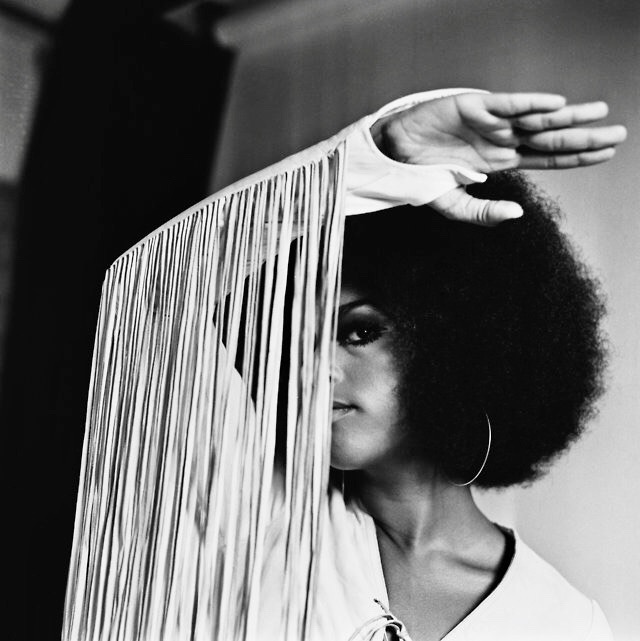 A Pretty Girl is Like a Melody’ was written by Irving Berlin in 1919.  It was the theme song of the Ziegfeld Follies showgirls. The song is featured in the iconic 15-minute long wedding cake musical scene In the 1936 film The Great Ziegfeld. This was the most elaborate and impressive musical number in cinema. The “wedding cake” set featured 200 performers on a gigantic rotating cake with spiral steps which cost the equivalent of $4 million today. The song later became popular as a theme for the Miss America beauty pageants.

A pretty girl is like a melody
That haunts you night and day,
Just like the strain of a haunting refrain,
She’ll start up-on a marathon
And run around your brain.
You can’t escape she’s in your memory.
By morning night and noon.
She will leave you and then come back again,
A pretty girl is just like a pretty tune.

‘You Must Have Been a Beautiful Baby’ was a hit single by Bing Crosby in 1938. Music and lyrics were by Harry Warren and Johnny Mercer. It was later featured in the movie Hard To Get, sung by Dick Powell. It was also recorded by its writer, Johnny Mercer, Tommy Dorsey, Perry Como, by Bobby Darin in 1961 and The Dave Clark Five in 1967 amongst others.

Bo Diddley’s 1955 hit ‘Pretty Thing’ (written by Willie Dixon) inspired the name of British band The Pretty Things who also covered this skiffle tune on their debut album a decade later in 1965.

The 1957 musical film West Side Story featured the song ‘I Feel Pretty’ sung by Natalie Wood’s character Maria who is head-over-heels in love. It was composed by Leonard Bernstein (music) and Stephen Sondheim (lyrics). The song has been covered by many female artists, and by Little Richard in 1996 on The Songs of West Side Story tribute album on RCA. Elton John did a cover version as well.

‘Pretty Woman’ released in the summer of 1964 is one of Roy Orbison’s biggest hits.

The Pretty Things from England took their name from the 1955 Willie Dixon song ‘Pretty Thing’ (see above). They morphed from garage band to R&B to psychedelia, releasing a rock opera in 1968 titled S.F. Sorrow.

‘Midnight to Six Man’ is by The Pretty Things (1964). The title was used as the opening lyric to ‘White Man in Hammersmith Palais’ on the debut album by The Clash. Bowie covered The Pretty Things songs ‘Rosalyn’ and ‘Don’t Bring Me Down’ on PinUps, his covers album of British bands he loved.

Listen: ‘Don’t Bring Me Down’ https://www.youtube.com/watch?v=Qxyah_W7J6U

‘Oh You Pretty Things’ is from David Bowie’s 4th studio album Hunky Dory released in 1971. This was covered by Peter Noone (with Bowie on piano) who had a bit hit with the song that same year. 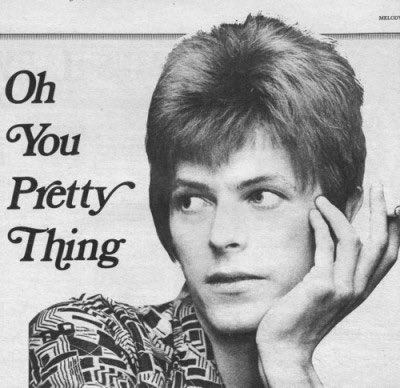 The Sex Pistols included ‘Pretty Vacant’ on their one and only studio album Never Mind the Bollocks, Here’s the Sex Pistols  in 1977. It was also the 3rd single from the album. There’s nothing pretty about this, but it is brilliant! 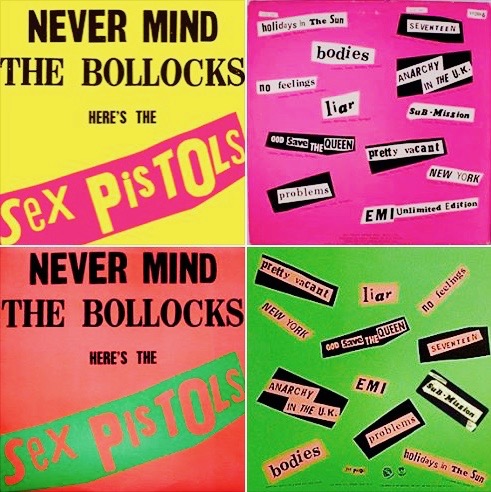 ‘Pretty Baby’ is on the third album by Blondie, Parallel Lines released in 1978. This is one of Debbie Harry’s sweetest and purest vocal performances. The song title and lyrics refer to the film of the same name, starring  child actress Brooke Shields, whom Debbie had befriended.

I love the line, “Deteriorate in your own time.”

This song ‘Pretty Please Me’ isn’t really about beauty, but I would do anything to work this into a playlist. I LOVE The Quick!!  In 1978, ‘Pretty Please’ was championed by Rodney Bingenheimer’s Rodney on the ROQ radio show who played it repeatedly on KROQ-FM. However, the records were not yet available for sale. There have since been cover versions by The Dickies and by Red Kross. This song is only available on the CD of rarities and demos titled Untold Rock Stories released in 2003 in the UK by Cherry Red/ Rev-Ola Records.

The L.A. power pop band’s debut album Mondo Deco released in 1976  was produced by Kim Fowley. Earle Mankey, guitarist  of Sparks (previously Halfnelson) was the engineer. The Quick are heavily influenced by British Invasion bands and by Glam rock. The band sputtered out after only three years, but this does not detract from their greatness.

Listen LIVE!  This is KILLER!!!: https://www.youtube.com/watch?v=scBGqsH5jnI 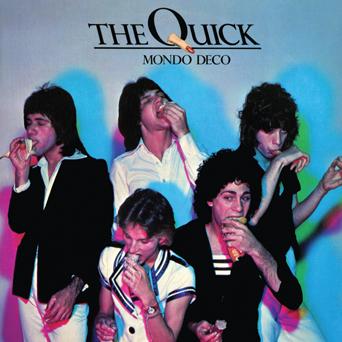 ‘The Pretty Things Are Going to Hell’ is a killer track on David Bowie’s 1999 album hours. I love the use of phasing on this one.

‘Pretty In Pink’ by The Psychedelic Furs is on the soundtrack of the 1986 film of the same name. It’s on the Furs’ second album Talk, Talk, Talk. The band were big fans of The Velvet Underground, hence the main riff being reminiscent of the one in ‘Sweet Jane’ and the reference to ‘Caroline’.

Here is my interview with Richard Butler upon the band’s first USA tour:

One of my favorite bands of all time is Suede. Their album Coming Up includes ‘The Beautiful Ones’ . This is about the 1990s teen scene in the U.K.

Cracked up, stacked up, twenty-two
Psycho for sex and glue
Lost it to Bostik, yeah

Shaved heads, rave heads, on the pill
Got too much time to kill
Get into bands and gangs

Another great Suede song is ‘Beautiful Loser’ from their album A New Morning.

… AND NOW FOR THE UGLY

‘If You Wanna be Happy’ by Jimmy Soul was a hit single in 1963. In this very up-beat song, Jimmy gives some sage advice to men. It’s based on a 1934 tune by the Calypso band Roaring Lion from Trinidad called ‘Ugly Woman’. Some radio stations banned the song because of the lyrics, and I’m sure it will probably be banned again at some point in history.

So, from my personal point of view

Get an ugly girl to marry you…

I saw your wife the other day!

Yeah, she’s ugly, but she sure can cook, baby! Yeah, alright!

The authentic swing of ‘Looks, Looks, Looks’ appears on Sparks 1975 album Indiscreet. On the swinging tune, Visconti hired a full authentic 1930s orchestra of elderly jazz musicians to accompany Russell’s vocal – The Ted Heath Orchestra -who greatly enjoyed the opportunity to reunite, also appeared with Sparks to perform the song on Supersonic amidst omnipotent bubbles).  The song was also performed on Top of the Pops.

Another wonderful outtake, ‘Looks Aren’t Everything’ was finally released in 2006 (on Sparks’ Big Beat CD) when Universal released re-masters of Sparks’ four Island Records on CD.

My favorite line is:

‘Funny Face’ by Sparks is on their album Whomp That Sucker  released in 1981 It’s about the desire to be ugly instead of beautiful. Tired of being liked only for his looks finally gets his wish when he jumps off a bridge. His suicide attempt fails, but his face is destroyed in the process, and he couldn’t be happier! Watch the long-lost video which surfaced a few years ago…

‘I Wish I Looked A Little Better’ is another self-effacing tune (like their new 2020 song ‘Self Effacing’) from the pen of Ron Mael of Sparks. This is on their 12th album, In Outer Space released in 1983.

See my story about Sparks’ new album released in May 2020, A Steady Drip, Drip, Drip 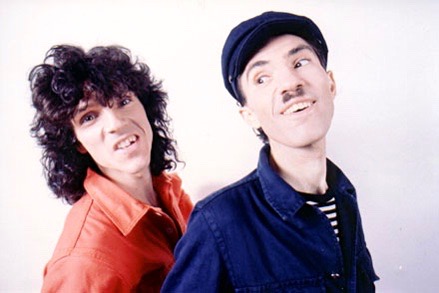 ‘Ugliness’ is on the 13th album by Iggy Pop, Beat ‘Em Up. This album features his band The Trolls. This song is about the ugliness in almost everything, but especially in the music industry…

You got a bunch of dumb fat guys,
In a wrestling uniform,
Trying to fake they’re playing music,
They ought to be killed.
And I’m trying to be a person,
But they all say I’m worthless.
This is my description of an ugliness…

Because the music sucks,
That’s why little kids blow up.
Everybody needs a gun,
To express feelings,
That should be expressed by a real musician…

They got the car the money house and all,
But they ain’t got no motherfuckin’ balls.
You see the cocksuckers on MTV,
And they ain’t even got a good CD… 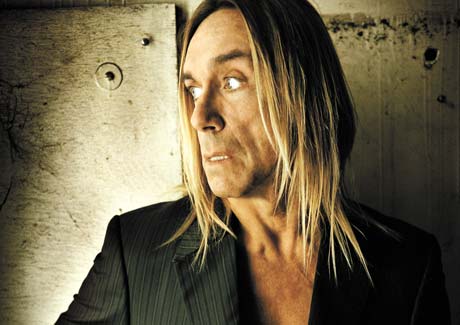 2 thoughts on “Beauty and the Beast”