This was the Stones’ follow-up to their Sgt. Pepper’s influenced album, Their Satanic Majesties Request (1967). In tribute to their colleagues, they had subliminally included the faces of all four Beatles in the psychedelic, lenticular cover art.

I was ten years old when this was released, and was in love with The Beatles (white album) which had been released one month prior. The similarities of the white covers with minimal, or no writing on them was obvious. There is a copy of Beggar’s Banquet in the studio during the Beatles’ Let It Be album sessions. 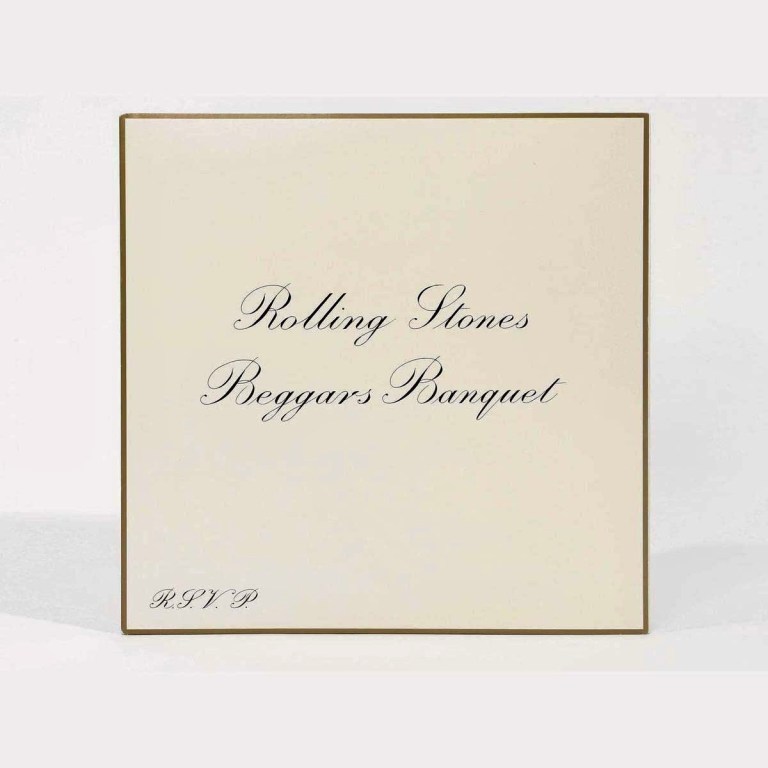 I later realized that the Stones’ album title was a pun. Beggars don’t usually get an invitation to a banquet, to which they must R.S.V.P. Another Stones album with a weird pun for a tile was Exile on Main St. The band was in tax exile from England, but they couldn’t possibly be very well hidden on Main St.

The Stones’ original cover idea for Beggar’s Banquet was a photograph of a toilet in a graffiti-ridden bathroom. The bathroom cover was rejected by the record company. The album was completed in July, but there was a 5-month delay in its release due to the album cover controversy.

(Alice Cooper’s School’s Out album cover with graffiti carved in a classroom desk reminds me of the original Beggar’s cover. It even has similar coloring). 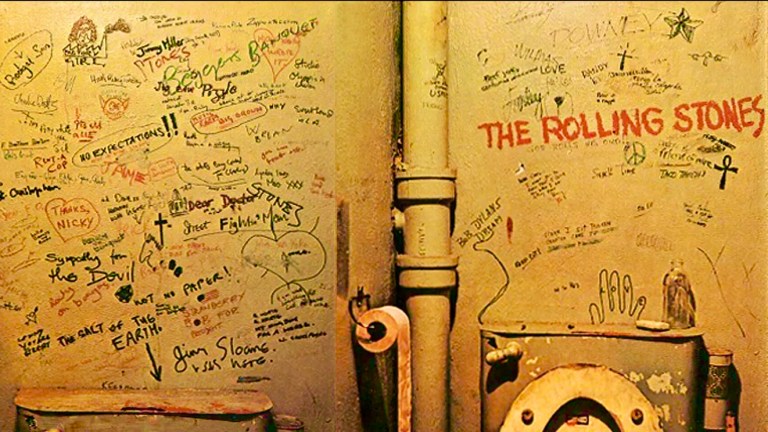 A photo shoot was done for a replacement cover, with the band dressed as beggars and jesters in medieval costumes, attending a banquet. The album launch party erupted in a food fight, started by Jagger (wearing a fork in his lapel in place of a flower) who planted a cream pie on Brian Jones’ face. Keith was missing from the proceedings that day. Their next album, Let It Bleed (November 1969) coincidentally featured a cake as the subject of its album cover. Ultimately, a more elegant, invitation cover (with the band’s name and the album title written in script) was issued, with “R.S.V.P” in the lower left corner. The bathroom version prevailed on later vinyl and CD issues. 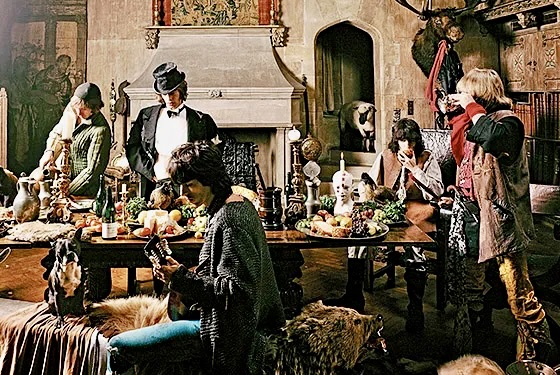 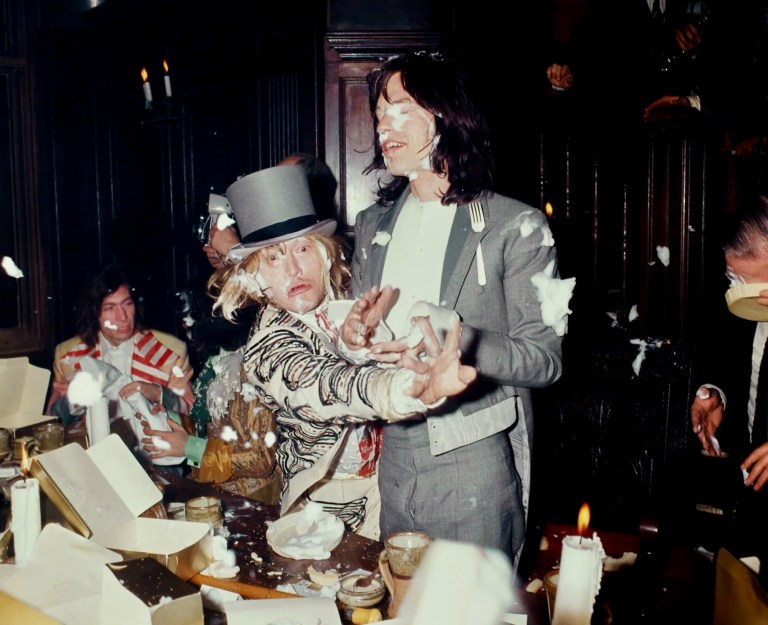 It was the band’s last album with any contribution by Brian Jones. He plays on only four songs, and would be gone from this earth within seven months. It was their first record with producer Jimmy Miller. The Stones performed several songs from Beggar’s Banquet on their television special Rock N’ Roll Circus, which was shelved and not released until decades later.

This incredible album contains many classic Stones songs, written in the midst of a cultural youth revolution, including the stunning opening track with disturbing social commentary ‘Sympathy for the Devil,’ in which a satisfied Lucifer sings,

I watched with glee while your kings and queens

for the gods they made.

It is appropriate that this song arrives at the end of the Summer of Love, which ended not so lovingly. It’s really amusing that in studio footage from the recording session, we can see that Jagger is wearing a frilly white shirt while singing the vocals on this sinister samba, as Lucifer personified!

Lyrically our satanic majesty starts off by narrating a polite introduction of himself, which quickly takes a turn for the worse! The eternal “man of wealth and taste” has witnessed (and caused) the crucifixion, the Russian Revolution, WWII and the killing of the Kennedys (the second of whom was assassinated during the composition of the song).

“I wrote ‘Sympathy for the Devil’ as a sort of Bob Dylan song. I wrote that song by myself. Keith suggested that we do it in another rhythm, so that’s how bands help you… I knew it was something good, ‘cause I would just keep banging away at it until the fucking band recorded it. But I knew it was a good song. You just have this feeling. It had hits poetic beginning, and then it had historic references and then philosophical jottings and so on. It’s all very well to write that in verse, but to make it into a pop song is something different. Especially in England. You’re skewered on the altar of pop culture if you become pretentious.”

Musically, it becomes increasingly disturbing, shamanistic and tribal, especially when performed live. At the Stones gig at Altamont in 1969, chaos and murder ensued, stirred by the cauldron of the music and the revolutionary times. Jagger wore a black and red-lined satin cape (by Ossie Clark, who designed most of Mick’s 70s stage-wear). The Greek *Omega symbol was emblazoned upon his shirt.

*The word “Omega” means the “Great O.” The book of Revelations refers to Jesus as the “Alpha and the Omega,” or the first and last.

“It has a very hypnotic groove… which has a tremendous hypnotic power, rather like good dance music. It doesn’t speed up or slow down. It keeps this constant groove. Plus, the actual samba rhythm is a great one to sing on, but it’s also got some other suggestions in it, an undercurrent of being primitive, because it is a primitive African, South American, Afro-whatever you call that rhythm. So to white people, it has a very sinister thing about it. But forgetting the cultural colors, it is a very good vehicle for producing a powerful piece. It becomes less pretentious because it’s a very unpretentious groove. If it had been done as a ballad, it wouldn’t have been as good.”

The first single was ‘Street Fighting Man.’ The picture-sleeve, depicting a street riot was also withdrawn. The song was also banned from the airwaves for a while. 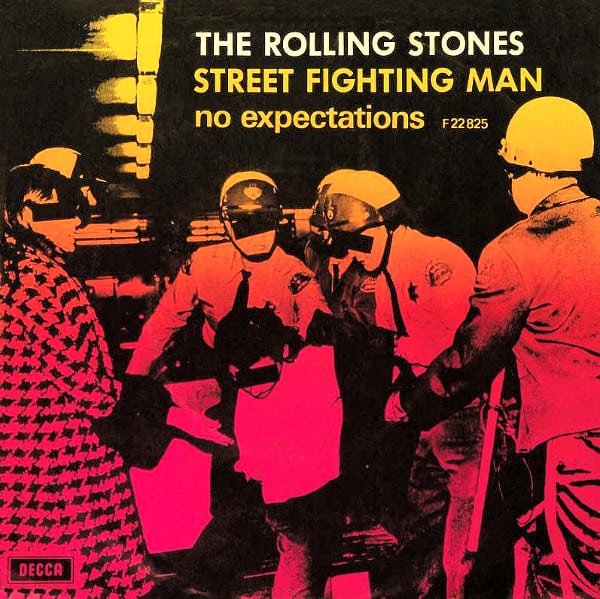 Beggar’s Banquet was considered the Stones’ “comeback album”, after their disastrous year in 1967 with the Jagger/Richards/Jones drug bust, and dabbling in psychedelia. The band returned to their successful and natural foundation; blues and folk, including some acoustic songs.

There was an error in the mastering of the original album. The tracks were slower, and therefore in a lower key. In 2002, Beggars Banquet was reissued and remastered at the correct speed.  The songs sound brighter in a higher key, and slightly faster. As a result, the remastered version is 30 seconds shorter!

Let’s indulge in this masterpiece on its anniversary! 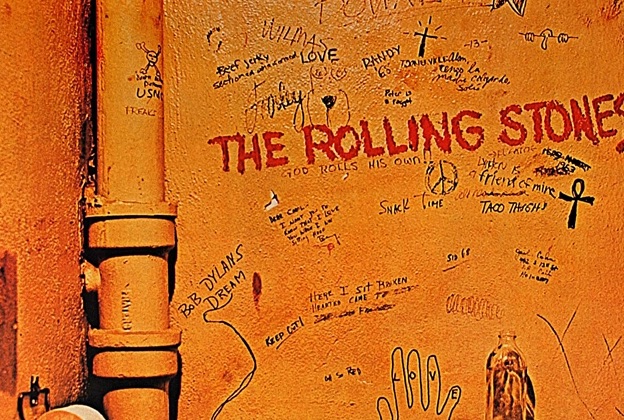 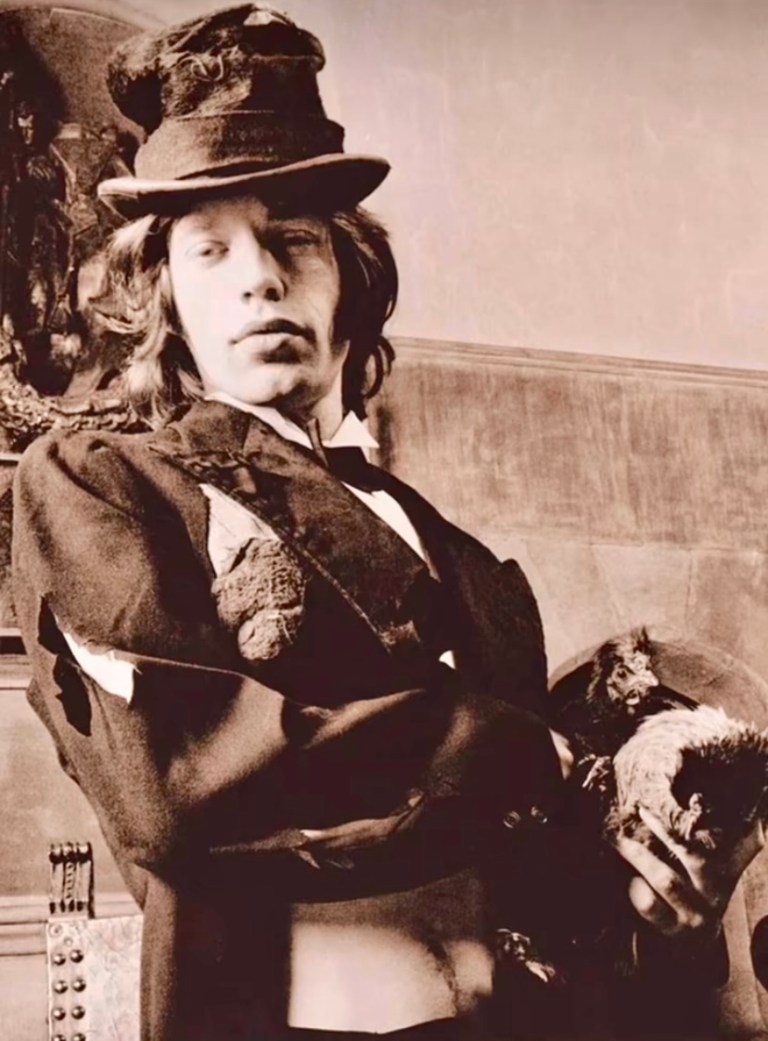