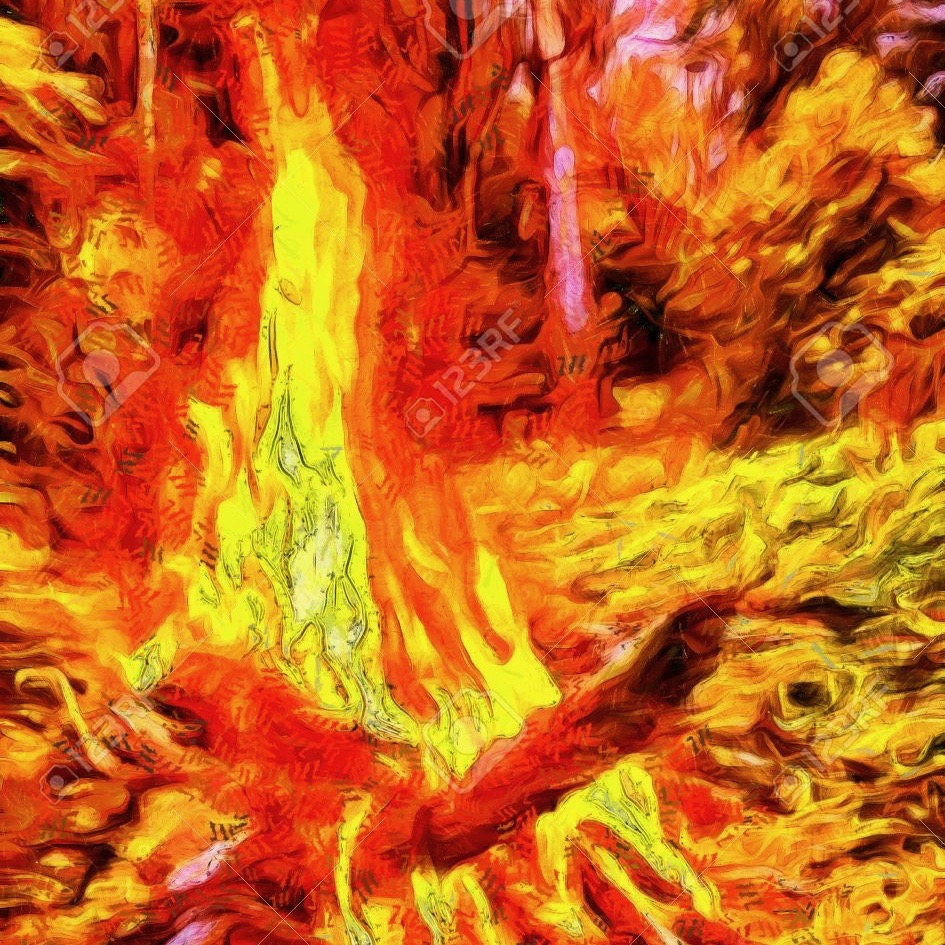 There are many songs about the fire of love, burning desire and the heat of passion.

Actual fire has made its way into the act as well, with onstage explosions punctuating some of rock’s finest moments – from Jimi Hendrix’ sacrificial burning of his guitar, to the pyrotechnics of the Plasmatics and KISS.

It’s all in good fun, so let’s light the eternal flame of Rock & Roll music!

‘Great Balls of Fire’ by Jerry Lee Lewis is one of the first great rock n’ roll songs ever released. It was recorded at Sun Studio in Memphis and released in 1957. This song ignited the eternal flame of rock n’ roll.

‘Ring of Fire’ by Johnny Cash was originally recorded by his sister-in-law, Anita Carter. In 1963 Johnny did a remake with trumpets accompanying the rollicking country beat, resulting in a hybrid Mariachi cowboy song.

The Rolling Stones song ‘Play With Fire’ was the b-side of ‘The Last Time’ in 1965. It appeared on the album Out of Our Heads for its American release later that year. Producer Phil Spector is on bass. It’s a minor-keyed two-minute warning to a wealthy high-class girl about the dangers of dating a Rolling Stone – supporting the newspaper headlines regarding the band at the time, ‘Hide your daughters!’ Their clever manager, Andrew Loog Oldham devised the slogan, ‘Would You Let Your Daughter Marry A Rolling Stone?’

‘Fire Engine’ is a psychedelic delight with some warped and wacky siren sounds by 13th Floor Elevators. Roky Erickson, singer/guitarist of the early psych rock group suffered from paranoid schizophrenia which derailed the band. They only made four studio albums. However, they did reunite in 2015. Roky passed away on May 31, 2019 at age 71.

The Jimi Hendrix Experience recorded this syncopated amalgam of musical styles, ‘Fire’ in 1967. It was released in 1970 on the album Are You Experienced. Jimi torched his guitar onstage at the Monterey Pop Festival – beckoning the flames like a snake charmer and then smashing the instrument to bits. Ironically, Jimi’s bonfire was not during the song ‘Fire’, but during his cover of The Troggs’ masterpiece ‘Wild Thing’.  Seventeen-year old photographer Ed Caraeef captured the iconic fiery photo. He also shot The Stooges at the Whisky and his photos appeared on their Fun House album cover 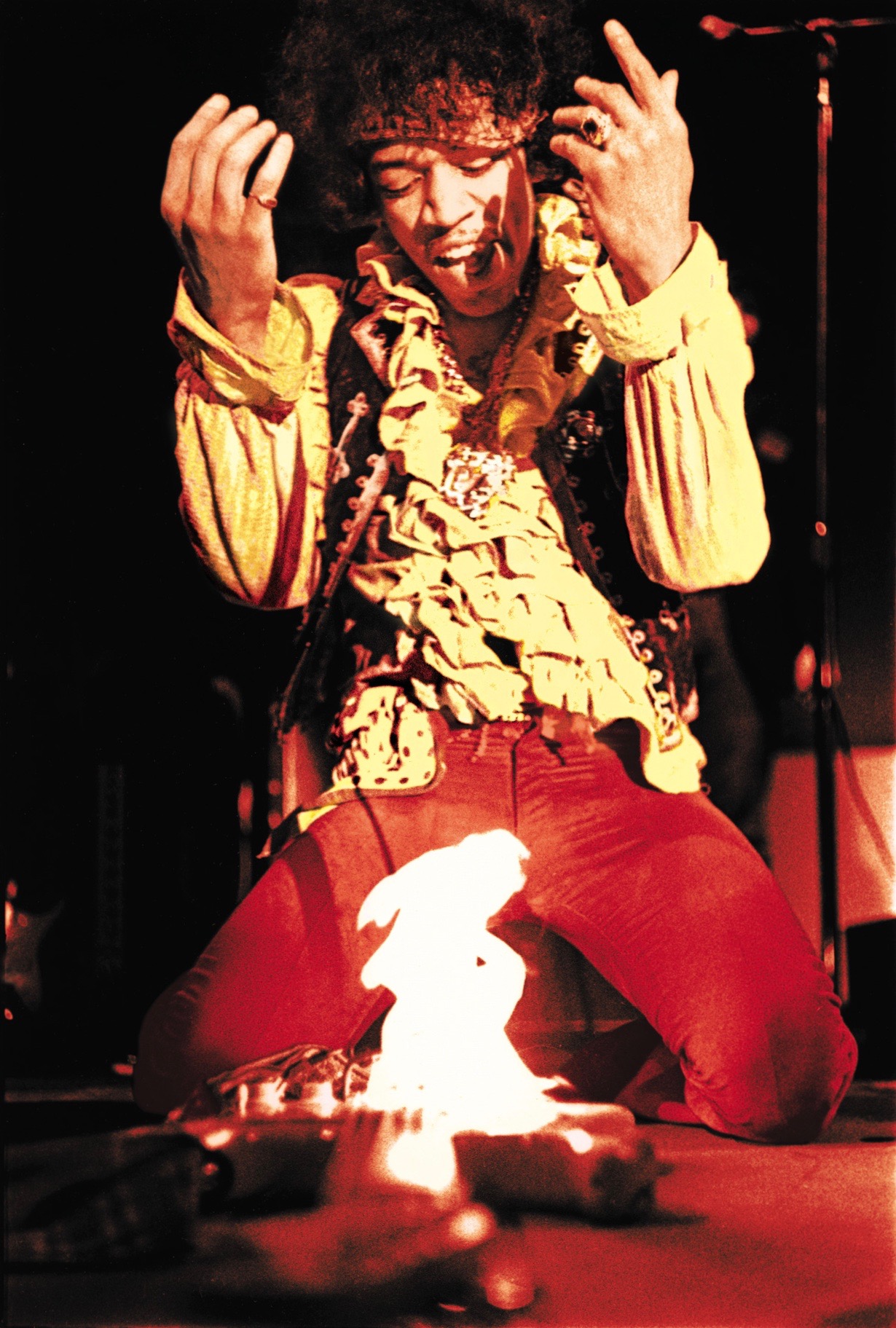 The Doors performed an edited version of their hypnotic 7-minute long track ‘Light My Fire’ from their 1967 debut album on The Ed Sullivan Show. They notoriously refused to alter the lyric “girl we couldn’t get much higher” as requested by Sullivan’s producer. Jim Morrison wore black leather from head to toe. He certainly set the night on fire! The Doors were then banned from the show forever. Jose Feliciano’s Flamenco version was a big hit as well the following year

Watch The Doors on The Ed Sullivan Show:

‘Fire’ by The Crazy World of Arthur Brown scared me as a kid in 1968 – especially the promo film in which Arthur is singing from hell. An eerie organ sound and brash horns assault our senses. Wearing pre-Alice Cooper face makeup, a paint-smeared chest and a flaming metal headpiece with horns, Brown wildly screeches, portraying the ‘God of Hell Fire’ in this disturbing song in which fire destroys everything. Arthur Brown is alive and kicking – and currently on a U.S. tour (2019).

‘Fire Brigade’ by The Move is an early 1968 Glam rock hit (with a riff that resembles Eddie Cochran 1958 ‘Summertime Blues’ – which later morphed into the opening of The Sex Pistols’ ‘God Save the Queen’) from singer Roy Wood and drummer Bev Bevan (of ELO) whom later formed a new Glam rock band, Wizzard.

‘Motor City is Burning’ is an incredible cover of John Lee Hooker’s blues song by The MC5. It’s on their live 1969 debut album (recorded in 1968) Kick Out the Jams.

‘Jump into the Fire’ was the second single from Harry Nilsson’s 1971 album, Nilsson Schmilsson. Despite hearing it for the first time on AM radio I knew this track was really special – especially the 7-minute version! The extreme vocal echo is super cool, but this is absolute ground zero for drums and bass! The bass intro is a thumping heartbeat. What other song has a long tribal drum solo followed by a long bass solo?

This song has an AMAZINGLY stellar line-up of musicians. The wild beat is supplied by Jim Gordon, drummer with Delaney & Bonnie, Eric Clapton and John Lennon & Yoko Ono’s Plastic Ono Band.  Bass is by Herbie Flowers (of T. Rex, Elton John and Bowie’s Space Oddity and Diamond Dogs albums, AND of Lou Reed’s classic ‘Walk on the Wild Side’). Flowers’ stand-up bass solo on Reed’s track is astounding!!! On Nilsson’s song, Flowers connects to the heartbeat, and later lets his bass warp out of tune as it reaches lower and deeper throbbing and vibrating notes. You can actually feel the buzz…

There’s a great version of ‘Jump Into the Fire’ by Robin Zander of Cheap Trick on his first solo album (1993).

Read my FULL STORY about this song – Nilsson On Fire:

LCD Soundsystem did a version of “Jump Into The Fire” as well.
BBC Radio 1: https://www.youtube.com/watch?v=iWzrtxs-gW4

Released as a single in 1972, ‘Burning Love’ was Elvis Presley’s last big hit. And it was a great one!

‘Smoke on the Water’ by Deep Purple is from their 1972 album Machine Head. It became a hit a year later when released as a single. This song begins with the most famous rock guitar riff of all time, played by Ritchie Blackmore. The song chugs along to tell the story of how the band were about to record an album in Switzerland, when the building burned to the ground. The riff originated with ‘Money (That’s What I Want)’, co-written by Motown’s Berry Gordy and made popular by Barrett Strong in 1959 and covered by many, including The Beatles. The riff is also used on ‘Kick Out the Jams’ by the MC5 and on The Stooges’ song ‘Loose’ from Fun House (1970).

Another killer Deep Purple song ‘Burn’ from the album of the same name was released in 1974.

Listen – ‘Smoke on the Water’: https://www.youtube.com/watch?v=ikGyZh0VbPQ

‘Firehouse’ is on the first KISS album. This is a humorous performance of the song on The Mike Douglas Show.

The Ohio Players had a funky No. 1 single and an album titled ‘Fire’ in 1974. The song starts with a real fire engine alarm. The album cover has a sexy girl in a fireman’s hat, similar in style to their next album cover for Honey in 1975.

Dwight Twilley Band released a great song from their first album Sincerely, called ‘I’m On Fire’ in 1975. The single is especially cool with reverb effects.

‘Baby’s On Fire’ is on Brian Eno’s first solo album after leaving Roxy Music. Here Come the Warm Jets was released in 1973. Another one by Brian Eno, ‘Burning Airlines Give You So Much More’ is on his second solo album, Taking Tiger Mountain (By Strategy). These two weird pop albums with cryptic lyrics about the orient are amongst my favorites. I love Eno’s voice although he hardly ever sings these days – ever since he went ambient! (Eno’s wonderful Apollo album got a re-released deluxe treatment for this year’s 50th anniversary of the Moon landing!)

Robert Gordon and Link Wray perform a great twanging guitar version of Bruce Springsteen’s 1977 song ‘Fire’. As Springsteen did not release the song on his own that year, Gordon and Wray’s version was the first recording of it ever released – on Gordon’s 1978 album Fresh Fish Special. ‘Fire’ was also recorded by The Pointer Sisters.

Talking Heads have a couple of fiery songs. The single ‘Love goes to Building on Fire’ preceded their debut album Talking Heads: 77.  (It was a bonus track on the 2005 CD reissue). The funky ‘Burning Down the House’ is a phrase inspired by  Parliament Funkadelic’s audience chant of ‘Burn down the house!’ The song is from Speaking In Tongues, Talking Heads’ fifth album released in 1983.

‘Burning Down the House’ Remaster:

‘Down in Flames’ is from The Dead Boys’ debut 1977 album Young Loud and Snotty. It’s an original song of the band Rocket From The Tombs, of which some of the Dead Boys were former members.

‘You Burn Me Up I’m a Cigarette’ is a frantic rocker on the first solo album of Robert Fripp (formerly of King Crimson) titled Exposure, released in 1979. This album is his pop experiment. The song is sung by Daryl Hall of Hall & Oates. Fripp produced Daryl’s first solo album. The clip below has a preface on which you can hear Brian Eno speaking. This really sounds like a Cheap Trick song – and Fripp DID perform it with the Tricksters in 2016 on Hall’s HDTV show Live From Daryl’s House HDTV. Listen below.

‘Love Like Fire’ is by Billy Idol’s former band Generation X. It’s on their second album, Valley of the Dolls (1979) produced by Ian Hunter as the band were fans of Mott The Hoople.

The gorgeous ‘Slow Burn’ by David Bowie is on his 2002 album Heathen, features The Who’s Pete Townshend on guitar. The lyrics ‘at the center of it all’ presage those on his final album Blackstar (2016) released days before his passing.

David Bowie was a big fan of the multi-instrumental Canadian band Arcade Fire. He performed their song ‘Wake Up’ live in 2005 on the HQ Fashion Rocks awards. It speaks of childhood trauma and loss of innocence. It appears on their 2004 album Funeral. Bowie also sang back-up vocals on their song ‘Reflektor’ on their 2013 album.

Watch them performing the song with Bowie: https://www.youtube.com/watch?v=z6c9Ejfu-iU

‘You Will Set the World on Fire’ is on Bowie’s 2013 album The Next Day. This was his first album in ten years since Reality in 2003. I love this track as it resembles the style of his Scary Monsters (and Super Creeps) album.

‘Fire Coming out of The Monkey’s Head’ is a heavy song by Gorillaz from their 1995 album Demon Days, examining political and ecological catastrophe.

I hope this playlist leaves you in a smoldering ruin!

And I mean that in a good way!

Eat to the Beat!

3 thoughts on “Playing With Fire”