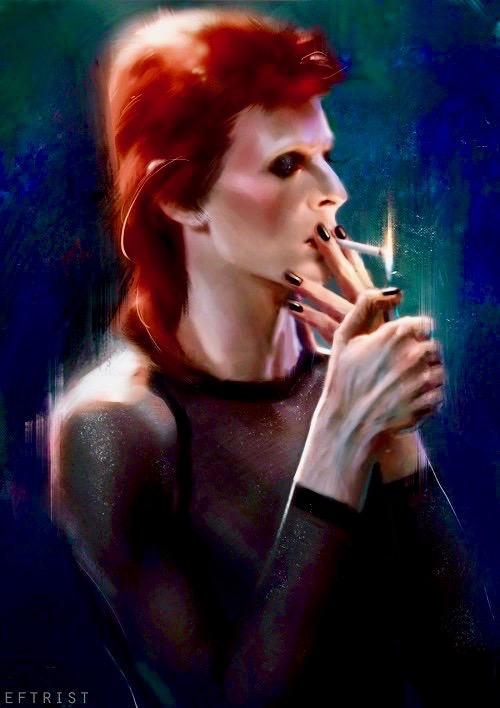 In 1972, Bowie created an entire world and destroyed it – on one album. ‘Rock N’ Roll Suicide’ is the final song on his masterpiece, The Rise and Fall of Ziggy Stardust and The Spiders From Mars.

Ziggy’s rise and fall spanned eighteen months. However, the Ziggy character that he created would not loosen its grip on Bowie’s psyche for quite a while longer.

This beautifully dramatic anthemic waltz is the space-age album’s pinnacle, graced by the gorgeous arrangement and stunning guitar work of Mick Ronson and the production of Ken Scott and David Bowie. The three-minutes long tune begins acoustically with intimate up-front vocals, escalating with sweeping strings. Bowie’s (Ziggy’s) voice rises louder and louder, becoming desperate. His screams are followed by one final note, played by a multitude of strings – sustained and suddenly silenced at the end.

Bowie’s sweeping score and cinematic lyrics paint a picture of angst and despair, making us feel as though we are in a film. Perhaps it’s the same American movie being watched by ‘the girl with the mousey hair’ in Bowie’s song ‘Life On Mars?’. Street scenes of Chev (Chevrolet) brakes, milk floats and stumbling home at dawn conjure images of American cars, cafes and ice cream parlors* with their rock n’ roll  jukeboxes frequented by teenagers in the 1950s – the birth of the genre. The song’s melody and ¾ time signature evoke The Righteous Brothers’ epic ‘Unchained Melody’ (originally written for the 1955 prison film, Unchained) and conjures the style of American doo-wop songs.  ‘Rock N’ Roll Suicide’ also has a vaguely European resonance. It is also reminiscent of Otis Redding’s ‘I’ve Been Loving You Too Long’.

“What I enjoyed was being able to hybridize these different kinds of music somewhat. To go from a ’50s rock flavored thing with an Edith Piaf nuance on it produced that. There was a sense of French chanson in there. It wasn’t obviously a ’50s pastiche, even though it had that rhythm that said total ’50s. But it actually ends up as being a French chanson. That was purposeful. I wanted that blend, to see if that would be interesting. And it was interesting. Nobody was doing that, at least not in the same way. The same approach was being adopted by a certain number of artists from that era.”

The time-obsessed Bowie begins by illustrating the power and manipulation of fleeting time and the control it has over us, in this anthem from a superstar space messenger to his young devotees:

Time takes a cigarette, puts it in your mouth…

“That was sort of plagiarized line from Baudelaire which was something to the effect of life is a cigarette, smoke it in a hurry or savour it”

The second line is usually misunderstood as ‘wall to wall’ but is actually, in Bowie’s handwriting…

The water-wall is calling, it lingers, then you forget

Bowie’s themes of time and age return. Teens in the twilight between youth and adulthood –  either too old or too young, not fitting in at all / living too long. This verse reminds me of Alice Cooper’s 1970 song ‘Eighteen’ except that at the end, Alice declares (after all the inner turmoil) “I’m eighteen and I like it!”

You’re too old to lose it, too young to choose it
And the clock waits so patiently on your song
You walk past a cafe, but you don’t eat when you’ve lived too long
You’re a rock ‘n’ roll suicide

In a comforting, sweeping crescendo Ziggy assuredly understands our pain – ‘heads all tangled up’ and knives lacerating our bran (mental illness). Our space-faced superstar savior declares that ‘no matter what or who you’ve been’ we are not alone.

Bowie fully recognized his responsibility as an icon and an elder to the kids who adored him, whether he was in the guise of a character or not – whether he was from this planet or not.  Bowie quantified that kids adored rock stars, substituting them as family members who had let them down.

“For the West, Jagger is most certainly a mother figure… . I also find him incredibly motherly and maternal clutched into his bosom of ethnic blues.”

David would soon conjure (in his song from Aladdin Sane, ‘Drive In Saturday’) a strange futuristic era when civilization forgets how to make love and must re-learn by mimicking a film scene; ‘when people stared in Jagger’s eyes and scored, like the video films we saw’.

Bowie urges self-acceptance. He knows how kids feel. ‘Gimme your hands’ is David’s appreciation of ‘a crack in the sky and a hand reaching down to me’ in his earlier song ‘Changes’ when he was a young pretty thing. Someone or something had saved him. Now he was reaching down to save us.

It is not known how many desperate teenagers’ lives that the song ‘Rock N’ Roll Suicide’ actually saved, but I suspect that the number is staggering and continues to rise.

Ziggy Stardust sacrificed his life to the revolutionary cause –giving his life for rock N’ roll and for the kids. Our savior must die, though he will never leave us. Ziggy had already instilled in the youth that we must ‘carry the news’ (in his song ‘All The Young Dudes’). There is also the aesthetic of The Who’s song ‘My Generation’ (‘Hope I die before I get old’). In fact, the ‘death’ he is speaking of could actually be youth itself.

See my story about the song ‘All the Young Dudes’:

Ziggy was larger than life – a savior who could reach us – beyond parents, beyond mentors. He could turn us on – all together. Although he was perchance from outer space, Ziggy certainly had humanistic qualities, empathy and emotions.

Just turn on with me, and you’re not alone
Let’s turn on and be not alone

With a comforting touch of his hands, Ziggy reached down to pull us up, as he screamed…

Bowie had seen the musical revue Jacques Brel is Alive and Well and Living in Paris in 1968. The cast recording is one of Bowie’ top 25 albums, as he cited in 2003 (Confessions of a Vinyl Junkie”, Vanity Fair). David famously performed Brel’s compositions ‘Amsterdam’ and ‘My Death’ – the latter in concert, notably at his last live performance as Ziggy Stardust on July 3, 1973 at Hammersmith Odeon.

‘Rock N’ Roll Suicide’ was the closing song every night during the Ziggy Stardust tour. It was the final song performed by Bowie and the Spiders (Mick Ronson, Trevor Bolder and Woody Woodmansey) just after shocking the ecstatic crowd – and also his band – at the end of a wildly triumphant concert.

For the encore, Bowie wore a Lou Reed style ensemble – a tight black mesh long-sleeve top, with form-fitting black trousers outlined in red and silver sequins along the waist and outside seams with a band of sequins running down each leg (first worn at the Rainbow theater in London on August 19, 1972).

Onstage at Hammersmith, Bowie prefaced the song with the now infamous statement, “Not only is it the last show of the tour, but it’s the last show that we’ll ever do”). After the song he uttered the eternally-resounding words, ‘Bye bye, we love you!’. And Ziggy was gone… for a little while.

Ziggy Stardust refused to die. The character maintained his hold on Bowie’s persona through his next two albums (Aladdin Sane, 1973 and his album of cover songs, PinUps 1974) and it is alleged that it lingered during his American television performance on The Midnight Special – The 1980 Floor Show – also in 1974.

‘Rock N Roll Suicide’ was performed but not included in the television broadcast. Had it been aired, the word ‘suicide’ was to be bleeped. This was because earlier in 1974, a boy had died in the USA trying to imitate part of Alice Cooper’s stage act.

“It’s me singing Morrissey singing me”

Bowie’s ‘Rock N’ Roll Suicide’ was released by RCA records as a standalone single two years later, in April 1974 (shortly after ‘Rebel Rebel’ made the Top Ten) with ‘Quicksand’ from Bowie’s previous album Hunky Dory as the B-side. The single was simply credited to BOWIE. David also performed the song live on BBC radio show Sounds of the 70s on May 23, 1972 (broadcast on June 19) with The Spiders From Mars. This recording is on the 2000 release Bowie at the Beeb.

In October 1972, Bowie performed ‘Rock N’ Roll Suicide’ at Santa Monica Civic in California, which has since been released on a live album. Bowie recorded a soul version live in Philadelphia for his album David Live in 1974. A recording from the same tour was released on Cracked Actor (Live in Los Angeles ’74). His final performance of the song was in 1990 during the Sound+Vision tour.

Time takes a cigarette, puts it in your mouth
You pull on your finger, then another finger, then cigarette
The water-wall is calling, it lingers, then you forget
Oh, you’re a rock ‘n’ roll suicide

You’re too old to lose it, too young to choose it
And the clock waits so patiently on your song
You walk past a cafe, but you don’t eat when you’ve lived too long
Oh, you’re a rock ‘n’ roll suicide

Chev brakes are snarling as you stumble across the road
But the day breaks instead, so you hurry home
Don’t let the sun blast your shadow
Don’t let the milk floats ride your mind
You’re so natural, religiously unkind

Oh no, love!  You’re not alone
You’re watching yourself, but you’re too unfair
You got your head all tangled up, but if I could only make you care

Oh no, love, you’re not alone
No matter what or who you’ve been
No matter when or where you’ve seen
All the knives seem to lacerate your brain
I’ve had my share, I’ll help you with the pain

Just turn on with me, and you’re not alone
Let’s turn on and be not alone

Gimme your hands, ’cause you’re wonderful

You say that the day

And it’s never seemed so far away

See more in my category

Bye Bye, We Love You!

Bye bye, we love you!