HELLO! Let’s begin with a song about the inventor of the telephone,

The first telephone call was made on March 10, 1876 by Alexander Graham Bell.

Bell demonstrated his ability to “talk with electricity”

by transmitting a call to his assistant, Thomas Watson.

The first words transmitted were “Mr. Watson, come here. I want to see you.” 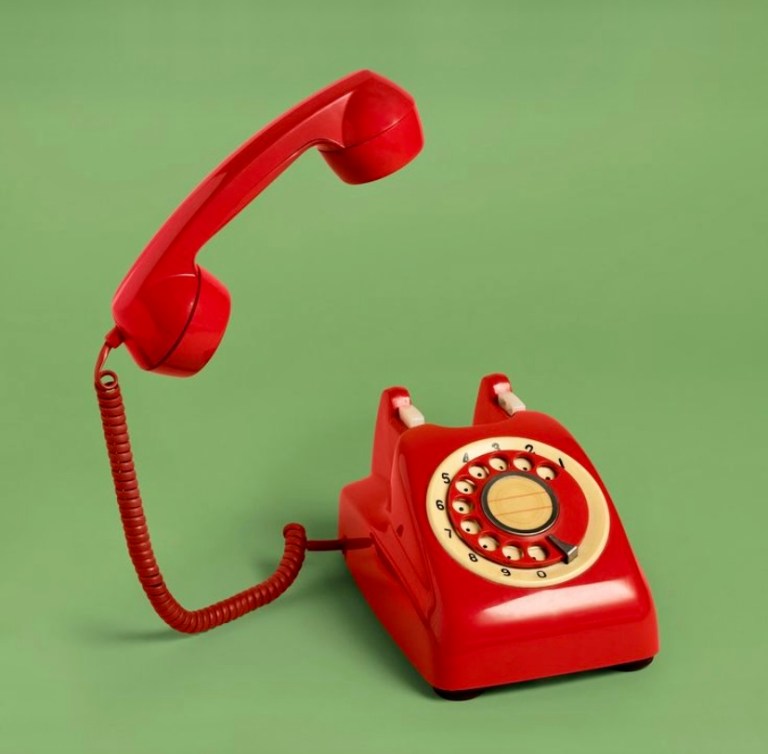 ‘Alexander Graham Bell’ is a great glam stomper by The Sweet, released in 1971. It’s a precursor to Bowie’s ‘The Jean Genie’ (which would appear on his Aladdin Sane album in 1973). Both songs are an amalgam of R&B influences; The Yardbirds’ cover of Bo Diddley’s ‘I’m a Man’, and ‘Oh Yeah’ by The Shadows of Knight. ‘Alexander Graham Bell’ followed up The Sweet’s 1971 single ‘Co-Co.’ At this point, they were still only singing vocals on their records and backed by session musicians, before they were allowed to shine on their own, developing a harder rock sound. 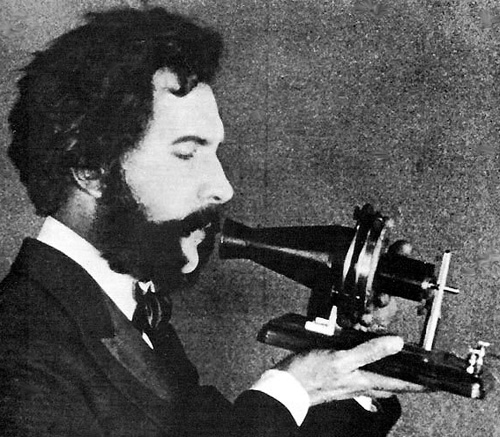 Alexander Graham Bell
Well, he knew darned well
That he could find the only way
To talk across the USA
Telephone, telephone
Never be on your own
Many many years ago
He started something with his first “Hello, hello”

Gian Carlo Menotti wrote a comic opera called The Telephone. It was performed by the Ballet Society and presented live in NYC in 1947 and later, on Broadway and at the Met. A man is trying to propose to his girlfriend, who is distracted constantly by telephone calls. Then he calls her from a telephone booth and proposes marriage over the phone. She accepts.

‘Memphis, Tennessee’ by the great Chuck Berry is a long distance telephone call. We are at first made to believe that the singer is missing his lover, Marie. However, it is revealed at the end that the person he is calling is only six years old – his own child of divorce. Many of Chuck’s songs have a punch line at the ending, revealing their true meaning. Also known simply as ‘Memphis,’ this smash hit was released in 1959.

Long distance information, give me Memphis Tennessee
Help me find a party that tried to get in touch with me…

Help me, information, more than that I cannot add
Only that I miss her and all the fun we had
Marie is only six years old, information please
You got to put me through to her in Memphis Tennessee

The Rolling Stones released the Jagger/Richards tune ‘Off the Hook’ on their second album in 1965, titled The Rolling Stones No. 2. The singer tries in vain to reach his girl, who has taken her phone “off the hook.” Then, in frustration, he decides to do the same!

Don’t wanna see her, afraid of what I’d find 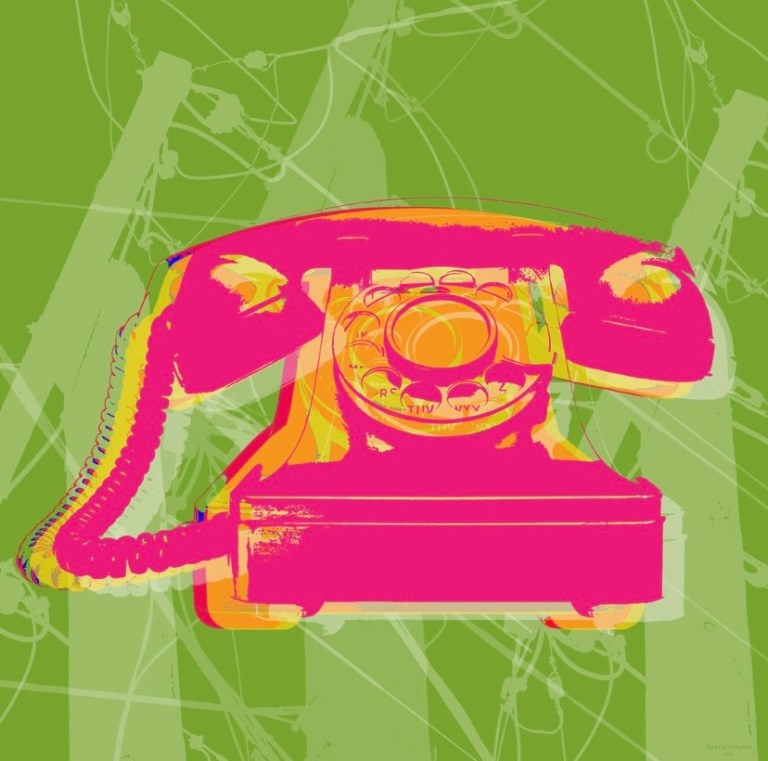 The Kinks released ‘Party Line’ in 1965. It’s the opening track on their 1966 album Face to Face. It begins with the ringing of a telephone. In the lyrics, Dave Davies tries to envision the visage of the girl on his party line. He wonders if she is a “she” at all – which pre-dates the lovely Lola, who would become the title of their iconic hit song five years later, in 1970.

‘New York Telephone Conversation’ is on Lou Reed’s 1972 album Transformer. This is about the same male characters – denizens of the underground – who also appear in another song from the same album, ‘Make-up.’ They are “coming out of our closets” / “out on the streets.’ Most likely, these are the same New York City folks who are the subjects of Lou’s song ‘Goodnight Ladies,’ with gossipy lyrics about fellow Manhattanites of the night.

Ooh my, and what shall we wear, ooh my, and who really cares?
Just a New York conversation / gossip all of the time
“Did you hear who did what to whom?” / Happens all the time
Who has touched and who has dabbled / here in the city of shows

See my story all about Lou’s Transformer album… 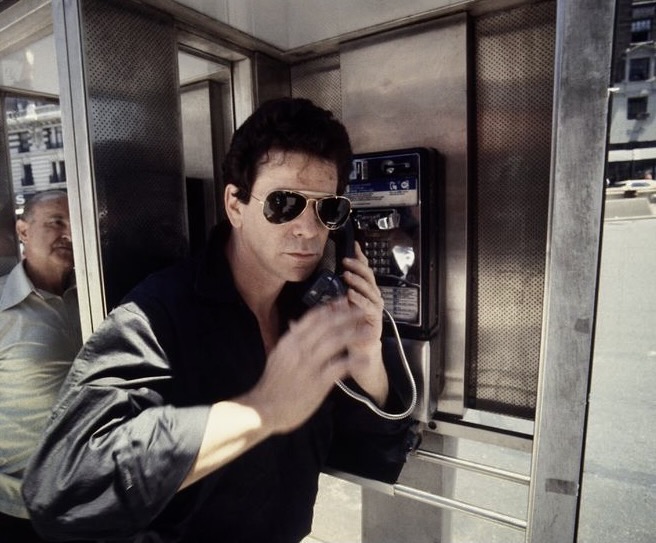 ‘Hello it’s Me’ was the first song ever written by Todd Rundgren, for his group Nazz. First it was a ballad, released as a 1968 B-side which usurped the A-side and became No. 1 on Billboard’s chart in 1969! It was later re-recorded at a faster pace for Todd’s album Something/Anything? in 1972, becoming a hit single in 1973. It features the fabulous Brecker brothers (Randy and Michael) on trumpet and tenor sax! I always loved the false start(s) on this track. This is a sad telephone conversation to a girlfriend about a breakup. 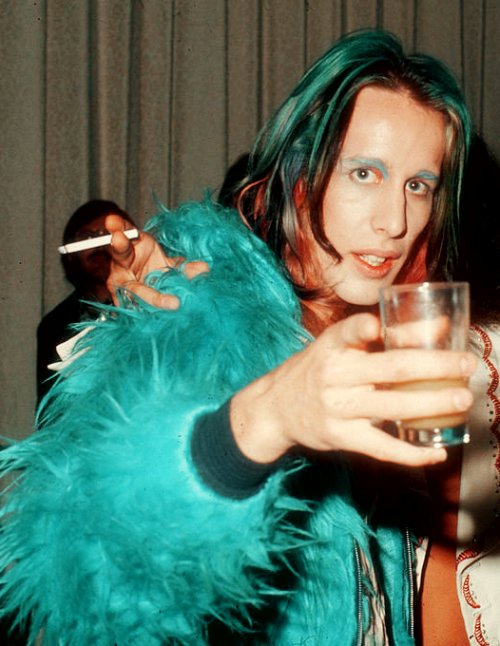 ‘Rikki Don’t Lose that Number’ was released by Steely Dan on their 1974 album Pretzel Logic. A guy tells his girlfriend to keep his number on hand, in case she changes her mind.

‘Telephone Line’ by Electric Light Orchestra starts off with a cool electronic intro which was often clipped when the song was played on the radio. It’s on their 1977 album A New World Record. This is another song about a girl who will not pick up her phone. ELO also release ‘Calling America’ on their 1986 album Balance of Power.

‘Get off the Phone’ is by Johnny Thunders and The Heartbreakers. It appears on their 1977 album L.A.M.F.  This was re-released with a new mix by Jungle Records in 1994. In true punk fashion, this phone call is the opposite of the usual story. A guy is blowing off his girlfriend for good. 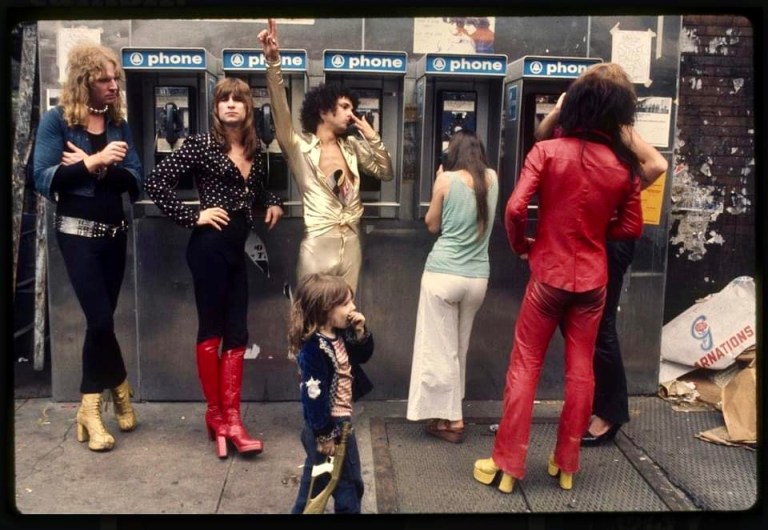 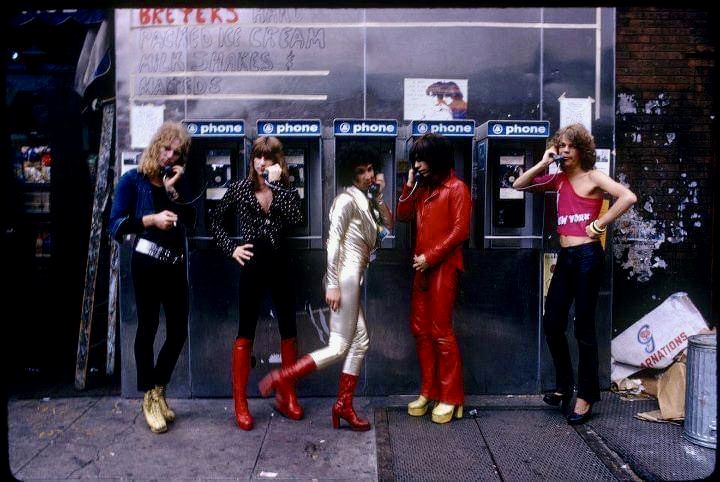 On ‘867-5309 / Jenny’ by Tommy Tutone, we learn what has become the most famous phone number in the world. Unfortunately, we do not know the area code. Lucky for Jenny, who was apparently fictional! In 1982, People magazine profiled people who were met with barrage of phone calls when fans started dialing their number.  867-5309 is no longer a working number in 97 of the 106 area code zones in the U.S.A.

‘Don’t Ring Me Up’ is a 1979 single by the great Irish Clash-inspired punk band Protex from Belfast. This is another song with punk attitude, in which the guy is telling the girl not to call him anymore. I saw Protex many times when they played around New York, and they were great! (Their name comes from the Clash song ‘Protex Blue.’ Protex is a brand of condoms). They have several other great singles including ‘A Place in Your Heart’ and ‘I Can Only Dream.’

‘Hanging on the Telephone’ was originally by The Nerves from California. The song, written by band member Jack Lee, appeared on their 1976 debut album. A fan gave the band Blondie a cassette of the song, and they decided to record it for their Parallel Lines album in 1978, and also released it as a single. Blondie included another of Lee’s songs ‘Will Anything Happen’ on Parallel Lines.

Blondie’s version starts with the same unanswered ring tone, and stays quite true to the original. Of course, this was a huge hit for them.

Blondie’s “other” telephone song is ‘Call Me’ which appeared in the film American Giggolo, and on the soundtrack album. The 1980 single was co-written by Italian producer Giorgio Moroder (of Donna Summer fame – he also worked with Sparks) who wrote the music, with Debbie Harry’s lyrics. It remained at No. 1 for six weeks in the USA, also reaching No. 1 in the UK and Canada. Debbie wrote the song from the viewpoint of a male hooker. Debbie and Chris Stein play on the track, but the other musicians were Georgio Moroder’s session men.

The Jam released ‘Girl on the Phone’ on their fourth album Setting Sons in late 1979. This is about a groupie who knows way too much about the singer, who is constantly calling him… 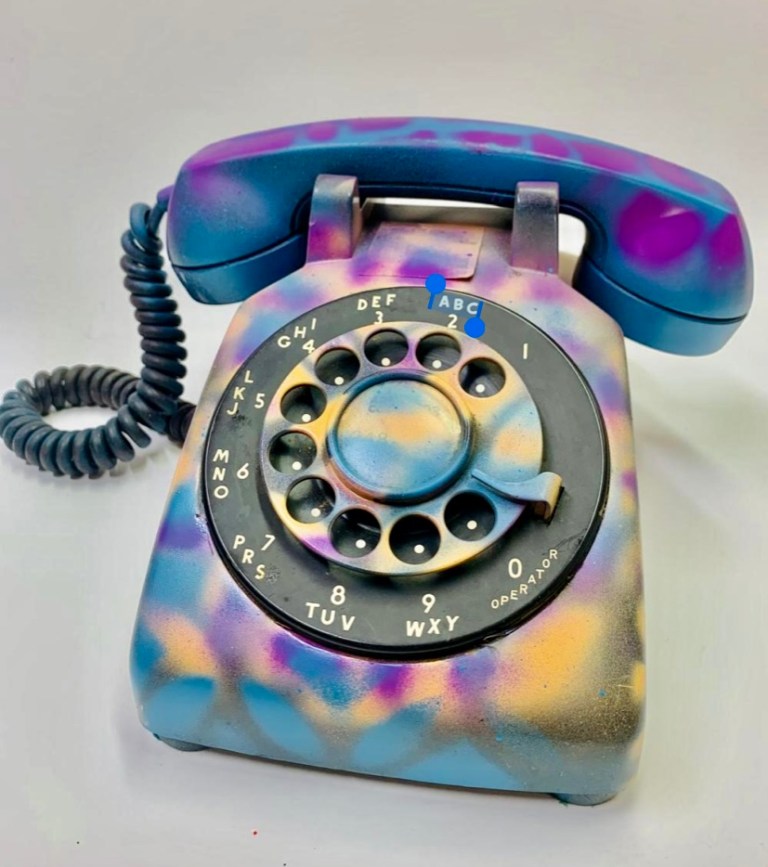 ‘The Telephone Call’ is the ultimate telephone song. This is on the 9th album by Kraftwerk, Electric Café, released in 1986. There is an array of cool synthesized telephone sounds; dial tones, busy signals, the clicking of a rotary dial and an operator indicating a disconnected number. This is simply a beautiful example of electropop, with an odd incidence of melodic vocals on a Kraftwerk track – evoking actual feelings… of loneliness and emotional disconnection.

WATCH the great video for the 2009 Remaster! https://youtu.be/OYhQVrXBgxU

My dear friend Hilly Michaels recorded ‘Calling All Girls’ in 1980 on his solo debut album of the same name. This is a fantastic power pop tune. Hilly gave Sparks their huge drum sound on their 1976 album Big Beat, and also played with Ian Hunter and Mick Ronson on record, and on tour. 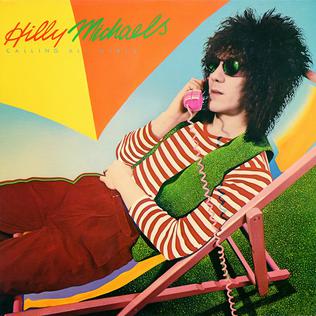 “Your Call Is Very Important to Us. Please Hold.” Who else would start a second sentence within a song title but Sparks?! This picks up where Kraftwerk’s “The Telephone Call” left off. Rather than making weird computerized noises, Sparks allow us re-live the frustration of that cold familiar teasing phrase repeated ad-nauseum over a strangely beautiful, yet angry classical piano trill, amidst more orchestrations. The lyrics allegorically refer to receiving “mixed signals” from a girlfriend.

This is on the Sparks album Lil’ Beethoven, released in 2002.

Another great phone song from Sparks is ‘iPhone’, from their album A Steady Drip, Drip, Drip released in 2020. With a militaristic drum beat and driving synths, ‘iPhone’ takes us back in time where biblical and historical figures have the same problems and interruptions as we do, when iPhones become a distraction. These famous folks range from Adam and Eve to Abe Lincoln, who pauses his Gettysburg Address to call out someone rudely using their phone during his important speech. But nobody has a worse problem than sobbing Mrs. Steve Jobs, especially since her husband who created the device is no longer with us! And of course, there is the inclusion of the F-word!

The chorus:  Put your fucking iPhone down and listen to me!

Yoko Ono’s scratchy ‘Talking to the Universe’ samples her voice (‘Hello. This is Yoko.’) from an older track (‘Telephone Piece’ from her album Fly, 1971). Yoko is always talking to her old friend – the universe, so this is nothing new. It is a wonderful track. The universe must feel honored. It seems as if she is communicating with something otherworldly – actually talking to the universe, or to the child inside herself. Perhaps she is translating the cries of animals, birds and trees – speaking for everyone and everything in pain, in need or in love.

Cibo Matto made some cool remixes of ‘Talking to the Universe’ for the Rising Mixes EP and bonus tracks. One of them incorporates their song ‘Know Your Chicken.’ 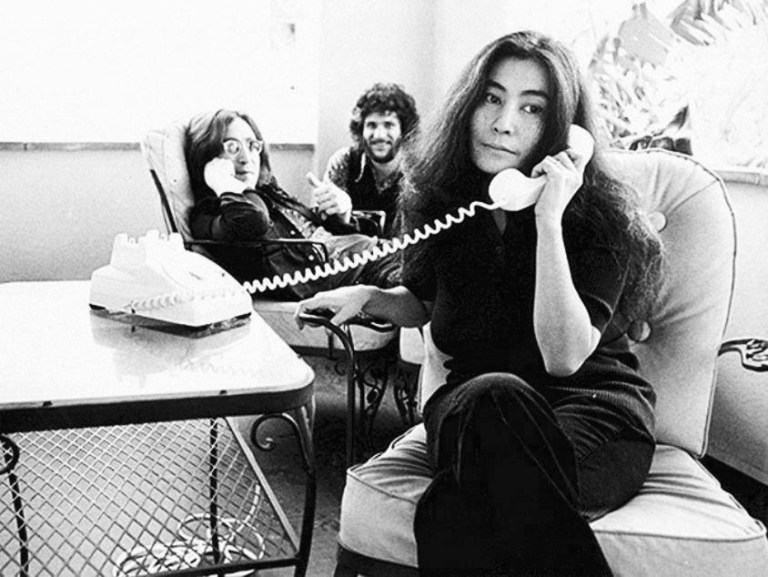 ‘Telephone Piece’ ends side four of Yoko’s 1971 album Fly. A phone rings six times. She answers and says, “Hello, this is Yoko.” It is so cool that she answers in the language (and particular ring-tone) of each country that the Fly album was released in; USA, UK and Japan. On the UK version the phone ring is different. On the Japanese vinyl she answers, “Moshi moshi, Yoko desu.” (“もしもし ヨーコで”). ‘Telephone Piece’ (English version) is sampled on ‘Talking to the Universe’ (Rising 1995.

Listen (in all four languages): https://www.youtube.com/watch?v=60foC_3pPLg

Also see my story: Telephone Piece – Hello! This is Yoko… 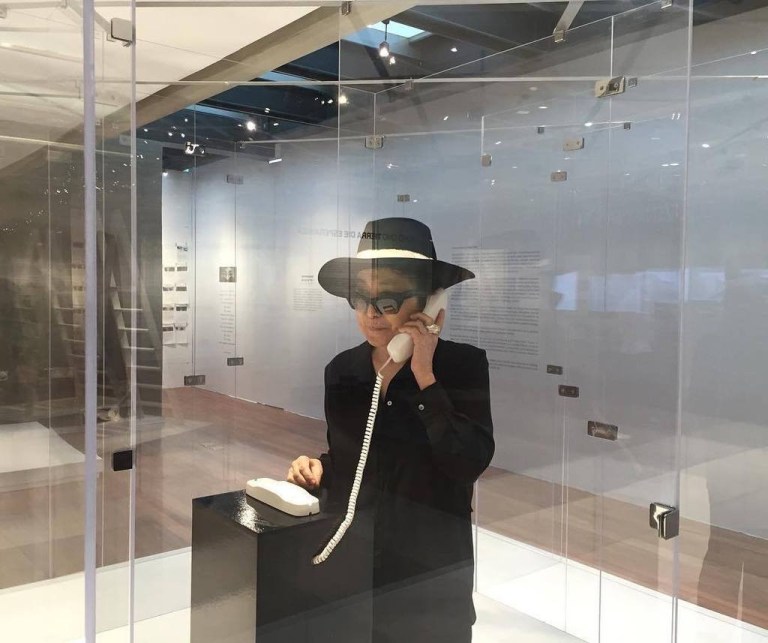 © Madeine Bocaro, 2022. No part of these written materials may be copied, photocopied, reproduced, translated, re-blogged or reduced to any electronic medium or machine-readable form, in whole or in part, without prior written consent. Any other reproduction in any form without permission is prohibited. All text on this site is protected by United States copyright law published or broadcast without prior written permission.

madelinex.com is a non-profit blog created for educational